CAT 6 plenum cable is solid standard cable used for the high speed gigabit Ethernet networks. It is best cost effective cable for a 1000BaseT gigabit network that requires multimedia capabilities. It is made from solid copper conductor which provides double bandwidth of a Cat5e plenum cable. With the solid core conductor’s plenum CAT 6 cable runs for long distances while maintaining the performance. It is designed with 4 twisted pairs of 23 gauge conductors and separated by a center spline which prevent from crosstalk between pairs. It supports future application of 10 gigabit Ethernet up to sixty meters and 100 meters for other variations of Ethernet. 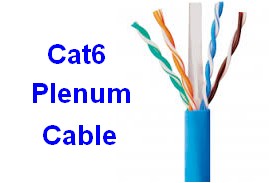 CAT 6 plenum cable comes with the highest level protection against flames and smoke which is provided by the National Electrical Code. It is very important because plenum cable is routed in the office building through the air conditioning duct and these duct can provides fuel to fire. The plenum cable meets the requirement of ASHRAE (American Society of heating, Air conditioning and Refrigeration Engineers) which requires that materials which will be used in duct should be fire and smoke resistant. It also ensures the protection standard of plenum cable and meets the National Fire Protection Association 262 and the Canadian Standards Association.


CAT 6 plenum cable undergoes flame protection tests under fire. It measures the level of smoke emitted by a plenum cable with calibrated smoke detection equipment. If cable fails the test then entire batch of plenum cable is rejected. But in most case it does not fail because of the Teflon flamarrest composite insulation covered over the cable. It produces low smoke under the fire which cannot be the reason of human death due the asphyxiation under fire smoke. CAT 6 plenum cable give better data throughput as it uses fibre optic technology.